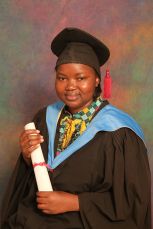 It often starts with hiccoughs… and after each wave there’s the vomiting. Vomiting everything you try to keep down, including the anti-emetics and water. When the stress is gone, the hiccoughs, too, pass.

Years or months later, out of nowhere you wake up one morning and you can barely see through that eye; sometimes even both eyes. If you’re lucky enough, you’ll be told you      have neuritis. If not, like me, they’ll just change your lenses or give you spectacles if you weren’t already wearing any. This phase, too, passes.

Then months or years later, it’s in your spinal cord. You feel as if insects are walking on some parts of your skin, get that weird pins-and-needles sensation,  and if by any chance you happen to cry about something it will later be like someone poured kerosene on your skin and lit a match. Talk about burning sensation!! Finally you get to know what it actually is to be paralyzed… You’ve also had problems breathing (I had problems taking a deep breath and yawning for a while- felt like my diaphragm had lost its elasticity and couldn’t move down past aparticular point).

In 2006 I was at the vomiting and hiccoughs phase. In 2008 I had my very first episode of optic neuritis… which also passed on it’s own without diagnosis despite seeking medical help on both occasions. However in 2011 when I had multiple symptoms that wouldn’t pass away on their own, I finally got to find out what the problem had been all along. Honestly, no one likes being told that they suffer from XYZ but by then you’ve been and still are in such a mess that you just want the puzzle to be solved; and feel relieved to be told what has actually been ailing you.

Now we’re in 2016. At one point or another you have been partially blind, paralyzed on more than one limb, had urinary incontinence and bowel dysfunction, experienced heat intolerance, been unable to get to sleep when it’s cold, misdiagnosed as suffering from MS and maybe even started on the disease modifying therapy for MS; done a gazillion tests for which you only appreciate the MRIs and lumbar puncture, had narcolepsy/difficulty waking up and staying awake, imbalance when walking  and cause of the repeated relapses almost every part of your body hurts and you’re on every category of painkiller known to modern medicine (except narcotics) but somehow you’re still alive and kicking it.

Then they ask if you’re on any medication and the kind of prescription you pull out makes them question if they can really treat you… even for malaria.

“Who sees you?”… “Sees me for what?”… Cause you have a neurologist, ophthalmologist, pain-specialist, psychiatrist, physiotherapist, nutritionist and a pharmacist. OH! And of course your favorite… The MS/NMO support group… Yay!!

So you’re told that it’s just a cold and not malaria. But how could you have known? You feel as if you’re going to die the very next minute! Just a minor infection always makes you feel like a walking corpse. Personally, I’d have to skip class for several days when I had the common cold back in campus.

By now you’ve also had to stop eating ABC because it is fact and not myth that these foods affect people with autoimmune disorders; so you always have your dates and chocolates and other healthy yummies as a backup for when you’ll start craving what you shouldn’t eat.

Spoonie you’re still alive (for more details about being a spoonie, check out The Spoon Theory here.  Years later, I’m still alive…Haha! In 2011 when I’d Google about NMO I was convinced that I’d be dead in no later than 1 year; seeing all those reports about             those people who died due to respiratory failure. I truly thank GOD for research since nowadays Google has better things to tell the newly-diagnosed.

Speaking of GOD, where would I be were it not for HIM? Kama sio wewe, ningekuwa wapi mimi?? HE has held my hand every single day since (and even before) the diagnosis in 2011. When I was desperate for a diagnosis, HE gave the neurologist the wisdom and knowledge. When I thought I’d die, HE gave me life over and over again. When 200mg of tramadol twice a day wouldn’t take away the pain, HE gave me sleep. The year when insurance couldn’t cover my hospital admissions anymore, HE provided the finances. When I was depressed HE gave me a reason to smile. When I wanted to stop pursuing Bachelor of Medicine and Surgery at The University of Nairobi, HE gave me a reason not to… And when I needed to be more stable and able, He did just that… and made me a doctor. That is JEHOVAH, THE LORD GOD ALMIGHTY, MAKER OF HEAVEN AND EARTH. HE is JESUS CHRIST, my LORD AND SAVIOUR. That is THE MIGHTY HOLY SPIRIT, THE COUNSELLOR, COMFORTER and INTERCESSOR. HE is THE STILL SMALL VOICE who tells you that “it’s possible”when every other voice says “Kwisha mimi!” (I’m finished!).

3 thoughts on “Hope for life with NMOSD”