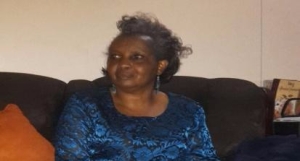 My name is Lucia Ndolo and I have Multiple Sclerosis. Writing my story was inspired by the newly diagnosed people who suddenly seemed to increase. Reading my story will encourage them and show them it is possible to live with MS (Multiple Sclerosis) by taking it positively.  The doctor I see, called Prof. Kioy, has also encouraged me to write my story.

My first encounter with MS was in Form 1 in 1975. I was in class when I suddenly could not write. I then called my teacher, who was called Ms. Alphie, and told her I could not write. Ms. Alphie was our class teacher and was very good.  The next day my dad and Ms. Alphie took me to Kenyatta Hospital where I was admitted. The doctor who attended to me was called Dr. Mwinzi. At that time there were no MRIs. So, Dr. Mwinzi did some tests, including the lumbar puncture, and others which I do not remember. I think that the doctor used my signs and symptoms, and the results of the tests to come to the conclusion that I had Multiple Sclerosis.  I stayed in hospital for two months.  By this time, I was getting worse. Every day my classmates used to visit me in hospital with Ms Alphie. At this phase of my life I really did not know my condition.  All I knew was that I was sick, was admitted in hospital and got better. One thing I came out with was a round puffed face. This was a side effect of the drugs I was taking,

I got another attack when I was in Form 2.  I went to hospital and got the same drugs.  Of course, I became puffy again. My mum and dad were really touched and supportive of me. The same can be said of my brothers and sisters as my parents taught us to always care for each other. My classmates also gave me a lot of support though they did not understand what the problem was, just like me. I went on and finished my fourth form, did Form 6 and went on and was admitted to Egerton College in September 1981, where I did Agriculture and Home Economics.  I finished college with no attacks.  I graduated in 1984. All this time I was ok. In fact, I had forgotten about my illness.  After I graduated I was posted to coast province, Kilifi district.

In 1985  I  got another attack.  This was 10  years since my last attack. I bought medicine, and after taking them I got better. Somehow I was feeling traumatized, as I did not understand what was happening to me. In September 1988 I got a beautiful baby girl and I called her Sarah. After one year and 3 months I got another attack. Hassan (Sarah’s father) went to Kenyatta Hospital to try and get photocopies of my hospital records showing my diagnosis. This was so we could see a doctor in Mombasa with the records.  We saw a doctor in Mombasa. In September 1990 I was lucky to be picked to go to Egerton University, as an inservice student, to do a BSc in Agriculture and Home Economics. When Sarah was 3 years old she went to stay with her dad, who as working with water, NGO KWAHO. I used to visit them as frequently as I could. I graduated in 1993 and was posted to Machakos District. In Machakos I was staying with my daughter and her father. My condition while in Machakos was challenging. I started getting dizzy spells and I would keep falling. Going on when I saw him, he wondered where I had been.  My DAO (my boss), called Kitheka, was very good. Sometimes he would send my workmates to come see me and pray for me. This used to happen when I could not go to work because I had had a relapse.  Life in Machakos was bad.  I had a lot of mishaps.  There was a time when I was going home and that time I was walking like a drunk person. Luckily I met Baba Sarah and he held me as we walked home.  At the back of my mind I wondered what people were thinking of me, it looked like Baba Sarah had come to pick me up from where I was drinking. There was a time when I fell down in a ditch. The ditch was quite deep such that I could not come out by myself. People kept on passing me by.  I don’t know if some of them thought it served me right because of my supposed drinking.

In Machakos I applied for Masters in Kabete Campus, Nairobi University to do Applied Nutrition. I was lucky to be accepted and even sponsored by DPM.  Life at Campus was good – I hardly had any attacks. However, once or twice I had them, and because the medicines still worked for me, I took them and nobody knew I was sick. I graduated in 2008 and was posted to Nairobi, Makadara division. It seemed like this was the time for MS proper to start. While in Makadara I used to work normally, go out when we needed to and basically work as was expected of me. One day I fell down quite badly.  It is from there that I started limping. While in Makadara, I was invited to join the provincial team on a trip to Kibwezi. It was here I had a chat with the provincial boss. She told me she wondered at these new staff who were always drunk. I then explained to her my condition. At long last she understood me.

I was then transferred to Lang’ata district which is located at Nyayo House. My stay in Lang’ata was good.  A friend of mine called Cayte kept on asking me what Lang’ata had done to me because I started going down. There was a time I had gone to the field in Kibera.  There was a small hill somewhere and I fell down. My falling down was not a big deal for me, as I was used to falling at times. This was not the case with the people I was with, as they were really astonished. Another episode happened when I was coming from the show ground. I was still walking without a stick and if one watched me properly I used to walk like I was drunk.  When I was coming from the show ground one day I met a guy who assumed I was drunk. He walked beside me and started laughing.  Then he asked me if he could buy me another drink, I guess to finish me completely. Anyway I just walked away. Another episode happened one day when I was going to the office.  I fell down near the parliament buildings. I was carrying an umbrella and my handbag. Both items fell down in different directions. There were 2 gentlemen walking beside me. The gentlemen picked up the items, gave them to me and went away. I was very grateful for that.

Professor  Kioy  had always told me that we should form a support group. One day, I had gone to see him as I was not feeling well.  As we were talking I asked him about the support group.  He took out a list from his computer, and highlighted those he knew would have liked to be in a support group. He emphasized on a Kimani and said he should be the first person I got in touch with. I called Kimani and we agreed to meet at Bounty hotel in South B, which is near where I stay.  Kimani told me he was in a white T-shirt; I also told him what I was wearing.  When I went to the hotel, I recognized Kimani immediately. He told me he recognized me from my walking style.  That was the start of the group. We chatted a lot and laughed at each other. The next meeting was also at Bounty Hotel.  We were about six, and the funny thing was that we all came with our walking sticks and we put them against the wall. This was very interesting to the viewers. Right now we have  registered our  organization. Kimani is our past chairman.  This  group has been very  helpful,  both for myself and  others.  In fact the group has celebrated four MS Days. MS Day is celebrated on at the end of the month of May each year.

As days went by my walking was becoming more difficult such that I would not walk to the bedroom. One day after this, my sisters and brothers came to see me and they asked what they could do for me to make my life easier. I told them I would like a wheelchair, a few days later I got a wheelchair. So I used to go with a wheelchair to the office.

MS is a condition that’s not well known. We as MS Kenya we have tried to make the condition known through interviews on TV and MS Days. We have also tried to get in touch with the CS of Health to let him know about the condition and fact that it has really spread. We have one lady in the group who has even gone to Mexico for cell transplant and we hope she comes looking well. As for me I hope they get a cure soon and that I will continue being positive in life.